skip to main | skip to sidebar

Mansfield with Monsters – critics say what? 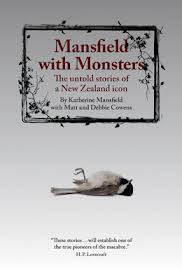 Mansfield with Monsters (Steam Press, 2012) has been reviewed a fair few times both online and in print (in some high profile publications!). Here’s a quick roundup of what’s been said and where:

Simon Litten got the ball rolling with a fantastic review of an advance copy of the book for the Science Fiction and Fantasy Association of New Zealand:

“…If Pride and Prejudice and Zombies was a one note song then Mansfield with Monsters is a choral piece of depth and vibrancy. This is a book that should adorn the shelf of every lover of fiction: master works by a master of short fiction. Mansfield is that good.”

"It's a lot of fun, it's very weird... you get the original language and then in and out come these creatures... often, to my mind, the resolution involves the supernatural in rather stunning and wonderful ways... I will never see the little lamp in the same way again... it's rather gorgeous how that builds up... there is enormous fun to be had. I think secondary school students will love this to bits..."

Paula Green from the New Zealand Herald was less impressed, describing the book in some detail then going on to say:

“To me, the book feels like an idea with intriguing potential that never goes beyond the narrow constraints of an exercise. It diminishes the power of Mansfield and never reaches the magnificence of the great writers of speculative fiction (Kelly Link, for example). Perhaps Mansfield kept getting in the way.”

John Toon, who was at the book launch, wrote on his blog:

“In a similar vein to Pride and Prejudice and Zombies, but with three unique selling points: for the Kiwi readership, it's based around the work of a New Zealand author; it's comprised of several short stories rather than a novel, so the ideas don't outstay their welcome and you're not left with a single gag stretched out for a couple of hundred pages; and the supernatural additions have generally been tailored to each story, rather than just being incongruous elements bolted on.  Basically, it's the art mash-up... Highly impressed with this book.”

Ngaire Atmore’s review in The Herald on Sunday (reproduced with permission on the BookieMonster site) was short but sweet, including the following lines:

“To put it simply, Mansfield with Monsters is quite brilliant. Funny, dark and seamless – Mansfield’s moody characters only seem enhanced by a bit of blood and gore. Steam Press is really the best new NZ publisher at the moment and I can’t wait to see what’s coming out next.”

Goodreads.com is a fantastic site for bibliophiles, and to date Mansfield with Monsters has been favourably rated and reviewed:

Amber – “Mansfield with Monsters is engagingly written, and the authors’ voice will pull you effortlessly into each story. The supernatural elements were such a natural part of each story that if I ever do read any of Katherine Mansfield’s originals, I’m fully expecting there to be zombies involved. My personal favourite was The Woman at the Store, which I found as deeply creepy as only a good horror can be.”

Marie – “Katherine Mansfield's writing is characterised by a subtle unease - a niggling sense of menace lurking just below the surface of middle-class New Zealand and English life. Rather than gut this innate tension with the addition of a supernatural twist, Matt and Debbie Cowens tease it out to create stories of Cthulian horror - occasionally epic, but often within the domestic and personal spheres that Mansfield excelled at depicting.”

David Larsen at The Listener had reservations before reading the book, but found it to be ‘grand fun’:

“The Cowens tweak Mansfield’s stories the absolute minimum amount required to transform them into HP Lovecraftian horrors. (It’s less than you’d think.) They bring a wicked sense of humour and a keen editorial ear to the project; I ended up reading their versions with the originals open beside me, so I could track down each individual alteration. Because you never know what the fantasy element in a given story will be, you have to treat each metaphor as a potential literal statement. The uncertainty transforms the reading experience delightfully: the girl described as a butterfly in The Garden Party might actually have wings. She doesn’t, it transpires, but ravenous giant insects feature. Everyone is very matter of fact about them. More from the Cowens, please.”

"“Mansfield with Monsters” proved to be a remarkably entertaining read. The macabre twist added to each tale is always different, and always delightful. I found myself wondering with anticipation, as I began a new story, where the Cowens would take this one. The level of integration of new material into the stories is sufficiently seamless that I found myself trawling the Internet for the originals to make comparisons...No doubt the Mansfield purists will be rolling their eyes in horror, but I’d certainly recommend this book for those English teachers who would appreciate a fresh take on Mansfield, bored students who need a break from the traditional short story, and anybody who likes properly scary horror fiction. Expect to see this book up for the Sir Julius Vogel awards next year.

Most recently, Mansfield fan and prominent book blogger Mel U reviewed Mansfield with Monsters on the highly popular The Reading Life website:

“The stories in Mansfield with Monsters:  The Untold Stories of a New Zealand Icon are brilliant, quite wonderful retellings of the most famous of Mansfield's short stories as if they were tales from the dark side.   They are so well done that they do feel just like she wrote them.   There are seventeen stories in this collection.  I really liked every one.  Some are laugh out loud funny and some are beautiful.   Mansfield's stories are often about lonely left out people and these stories capture that...Mansfield with Monsters:  The Untold Stories of a New Zealand Icon by Matt and Debbie Cowens is a totally fun, wonderfully written and very perceptive collection of stories.   You can tell the Cowens loved writing  these stories and I loved reading them.”

Mansfield with Monsters has yet to be reviewed or rated on Amazon – we are very curious to see what ebook readers have to say!
Posted by Matt at 7:30 PM 0 comments

So apparently I can 'share' a design from vistaprint. Not sure what that means exactly, but I really like my $9 Mansfield with Monsters poster (printed on lightweight vinyl), so here goes:


I don't know if this will let other people order one, just show off the design or what, but I'm happy to have one of these hanging on the wall in the office at home.
Posted by Matt at 5:40 PM 0 comments

I've heard of Kickstarter before. I know a few people who have crowdfunded projects. Today I decided to back a project set up by Ripley Patton to self-publish a YA novel called Ghost Hand:

Why this project? Because Ripley is an awesome, talented, community-minded writer who has given a whole heck of a lot to the NZ spec fic community. Because her series of blog posts about her self-publishing process has been really interesting to read:

And because a good friend of mine, Morgue, once agreed to buy something Debbie and I had made without a thought, without hesitation, without wanting to see it first, because he trusted us and because he wanted to support creative people doing good stuff.

I'm backing it because Ripley is good people.

I was pleased by the ease of use - as long as I didn't mind linking together a couple of accounts I didn't have to type in anything but existing passwords. Just sign into Kickstarter using my facebook account, pay with my amazon account. Boom.

Our book, Mansfield with Monsters, which features 17 Katherine Mansfield short stories adapted to include a variety of monsters and alien creatures, was launched yesterday. It's available from www.steampress.co.nz and also from amazon.com if you live anywhere except the EU :-) 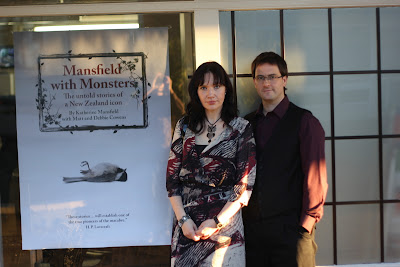 We entered the 48 Hour film contest with a teacher team, and were assigned the fantasy adventure genre. We decided to make something very, very silly:
Posted by Matt at 8:25 PM 0 comments

One afternoon in March 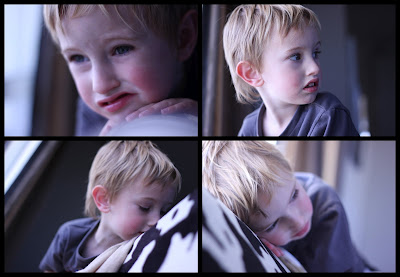